The volatility measures the risk. The risk is it a result of distribution of prices measured by the standard deviation. The standard deviation is an average deviation from the mean and that is what we call volatility. In other terms, it measures the amplitude of fluctuation (highest - lowest in a given period). The higher the volatility, the greater the risk will be important. In return, it will be faster to make a profit which can attract many investors. The choice of traded pairs will be made according to your profile.

Volatility tends to give further emphasis to large differences. It actually indicates a level of risk but the measure of the risk is not totally efficient.

Indeed, we do not know the profile of the average deviations. The differences can be regular or very irregular. For example if we say that the EUR / USD ranges in averaged by 300 pips per day, it can conceal the fact that during some days the parity varies from 600 pips and the other from 0 pip. Volatility have to be taken with distance.

Another criticism that can be done, the volatility does not provide information on the distribution tails. These are events that have very little influence on average because they are very rare. The EUR / USD has a volatility of 1000 pips on the day is such a rare event. Because of the number of distribution take into consideration in the calculation of the volatility, the move of 1000 pips, which is an exceptional event, will have a very little influence. However, the risk is there.

Now that you are warned of the risks to the use of volatility, I can show you why what you’re here, which is the most volatile parity. Such volatility shows the amplitude of movements at each parity. But beware, high volatility does not necessarily mean that the price of parity varied widely. The following study was conducted throughout 2008 and shows the volatility of different currency pairs in number of pips on a day of trading: 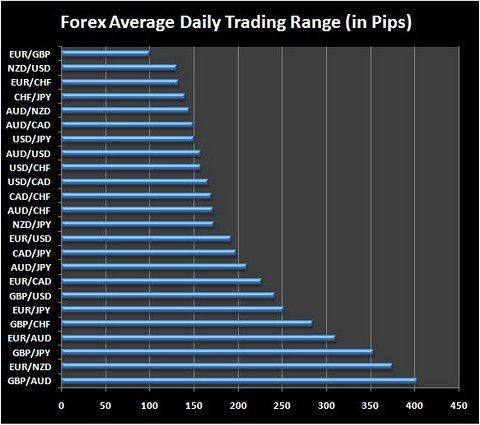 Here is a table showing the average daily volatility in 2008, in percentage this time : 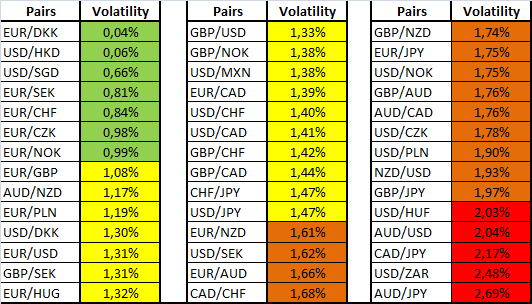 As you can see, pairs with the Yen are the most volatile. The scalpers will choose more of these pairs to achieve quick profit. The risk he will obviously be greater. Conversely, parity with the euro are less volatile and therefore these pairs will be easier to trade for investor playing the trend.

These data are also a way to compare the brokers between them. Indeed, the most volatile pairs have a higher spread than the others. In addition to limited liquidity, that can explain the large difference in spread between the EUR / USD (2 pips) and the GBP / JPY (6 pips). A scalper will therefore pay particular attention to pairs that he will trade to not be penalized by transaction costs too high (scalpers making many round trip). In contrast, a trader playing the trends can allow to trade on a larger panel of currencies.

Forex Volatility: Comparison with other markets

The volatility of different pairs leads us to compare this volatility with others markets. It is often said (wrongly) that the Forex market is very volatile and therefore it is a risky market. The table below illustrates the different volatilities of the main market in 2008 and that will prove they're wrong: As you can see, the Forex market is the least volatile. Its volatility is approximately equal to the volatility of U.S. treasury bills. Secondly, there are major global equity indexes, which are two times more volatile than the Forex. Then cames the gold. Everyone says that gold is a safe investment, certainly, but you have to play th trend in a more or less long term period. In the short term for day traders, that's another story!

Finally, there are large caps such as Total or Danone to end with commodities market that is one of the most volatile market in the world. Only small and mid-caps are more volatile, with a volatility between 5 and 10% on average during 2008.

You may now silence the critics because the Forex market is not dangerous. This is the abuse of leverage available that made the reputation of the Forex. In stock markets we find the same mistake with the options and leverage used ...

Here is another study that complements the first. The study was conducted throughout the year 2008 as well. It shows the average daily change in percentage on major currency pairs:

We note that the parity including the Yen are those with the largest variations. Concerning those which moving the less, it is mainly about parity with the British pound. This was a big surprise to found the GBP / USD at the bottom of the list because this parity is one of the most volatile. Finally, we note also that day with the biggest changes are Tuesday and Thursday. But, no surprise, these are the days when most important economic news are disclosed. For the rest, I let you draw your own conclusions.

Average yearly volatility of the EUR/USD

I know that everyone like this I give you one more study. Here is a study of average yearly changes from 1998 to 2008 on the EUR / USD: 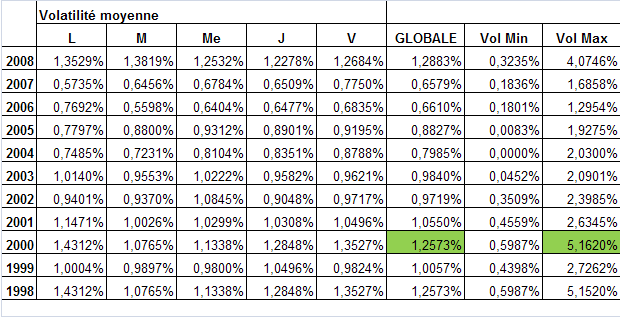 This study was conducted to reveal an essential point: the importance of the fundamental. Indeed, we note that the years with the biggest changes are those in times of economic crisis. 2000 with the crisis of the Internet and in 2008 with the subprime crisis are all factors which make it much more volatile foreign exchange market. During these periods, investors are in the dark and respond to any economic information given to them. It is always the case, investors have a lot of questions about the state of different economies that makes the market more volatile. One might conclude with this: The uncertainty to the use of volatility.