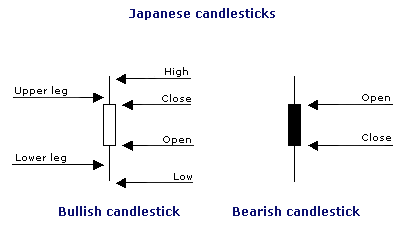 A - Timing should never be changed for decision making. However, it is quite advisable to change Timing for a long term analysis. Candlestick can give two indications completely opposite on the next movement. Eg: you see a reversal on a 15min charts but the1h charts can well indicate that the trend should continue. It can simply have a correction on the15 min chart and then the movement can poursuit. That is why you must never change your timing to take your decision. If you are on 15 minutes chart, you get a reversal, and normally, a second one for the continuation of the movement..

B - A candlestick should always be analyzed according to the trend or the movement that preceded it.

C - Always wait for a confirmation of the next candlestick to validate the decision of entry (or exit).

- Doji: A doji can be a plus sign, a cross or a reverse cross. The common point of these doji is that the opening price is the same as the closing price (or almost). The doji often appear after  a strong move. A doji cross is more neutral (middle). However, a reverse doji cross (on the right) is bearish if it appears in an bullish movement (Evening doji star or abandoned baby of the evening). Conversely, a doji cross(left) is bullish if it is in a bearish movement (morning doji star or abandoned baby of the morning).

- Doji with long legs: it has long high and low shadows. He is a strong sign of indecision.

- Geavestone doji: (its opposite is the dragon fly doji, shaped as a T) Gravestone doji indicates that buyers dominated the first part of the formation of the candlestick, but sellers have been strong enough to push back the price to the opening price, in the second half of the session. The gravestone doji is a strong sign of reversal. Its signal is stronger if the doji appears in a bullish trend. (Inversely for the dragon fly doji).

- Whirligig with long shadows: this figure is the same as a doji cross except that movements that built it were more violent and that the price does not close at the same price as the opening price. It is a reflection of high uncertainty, but can also be interpreted as a figure of reversal if it appears at the end of a strong movement.

- Hammer: The hammer is a figure of reversal. It appears in bearish trend and it is a sign of a bullish reversal. It is said that it is poundering the decrease. The long shadow indicates that the price has been face to a significant selling pressure but this one has disappeared at the end of the formation of the candlestick. It is better to wait a passing of the highest of the hammer by the next as a confirmation. The hammer can also play a role of spring. There is a spring when bears are unable to maintain the price below a broken support area. The shadow breaks violently the support but bounces over this line just after. (Inversely for hanging man)

- Shooting star: the shooting star implies that the Bullish have oriented the price during the first part of the formation of the candlestick but that the Bearish took back the control in the second part. The trend is being challenged on the occurrence of a shooting star. The next candlestick will be waited to confirm it. It should be noted that a shooting star with a gap has a higher power of reversal.

- Inverted hammer: the inverted hammer is created in a bearish trend. It implies that buyers have pushed the price to rise in the early formation of the candlestick but the selling pressure has diminished the reversal. It is a figure that requires more to be confirmed by the next candlestick.

- Penetrating: Unlike the black cloud coverage. Bearish trend at the beginning. Reversal figure which must be validated. Enter in a bullish trend.

- Bullish engulfing and bearish engulfing: (or bullish or bearish swallowing) The swallowing structure are reversal figure very effective and frequent. If a bullish swallowing appears in a bearish trend, you must be very careful and check that it really breaks a level of resistance. If the white body swallows the entire black candlestick that precede it (body and shadow), then it is a bullish key reversal. A bullish key reversal is necessarily an bullish swallowing, but the reverse is not true. All figures of swallowing must necessarily open lower (/higher) that the level of closing (opening) of the first candlestick, and close above (/ lower) than the level of openness (/ closing) of the first candlestick. More the candlestick of the swallowing structure are long, greater the signal is.

- Top clip: (opposite bottom clip) relatively similar to the black cloud coverage. The top clip is a reversal figure special by the fact that the higher of the two candlesticks whick formed it are at the same level. (Conversely, two lower for the bottom clip). This configuration may appear in various ways, with or without shadows, with formation of a hanging man (vice hammer, according to the trend that preceded), with a doji which will be in Harami position, with swallowing and so on.

Figures of continuation with Japanese candlesticks

- Bullish Gap: (opposite of bearish gap) A bullish gap appears when the opening of a candlestick is made higher than the closing price of the previous candlestick. In a bullish trend, a gap is extremely bullish, although generally speaking, gaps are often consolidated afterward.

- Bullish white twins: The figure results from the formation of three candlesticks with a gap, the opening the third chandelier is approximately at the same level as the previous candlestick but the closing price is also upward and at the same level. This figure can be considered as bullish if the previous gap is bullish. In contrast, the figure could be considered as bearish if the gap is bearish. (The figure will be composed of a bearish candlestick, a bearish gap, and two identical bullish candlesticks).