What Moving Averages are?

The moving averages are trend indicators. They have different timeframes, short-term, medium term and long term. As their name suggests there are an average of the last prices. So it helps to smooth the evolution of the price and its extremes. These indicators are widely used by traders because their use is simple.

There are 3 types of moving averages, arithmetic moving average, exponential and weighted. If the calculation method differs, all are averages of prices. Here an introduction of the 3:

- The arithmetic moving average (AMA): This is the most common because it is the easiest to calculate. Simply add the all prices of a period and divide it by the number of days. Thus, if the moving average is the AMA5 of December 10, we will need the closing price of 10th December and the previous 4 days.

- The exponential moving average (EMA): Just as the AMA, it is an average of prices except that it seeks to give greater importance to the most recent prices. Prices are weighted based on a percentage. Newest is the p rice, more important is the percentage. Everyone can choose the percentage of weight they want, for example 80%. Thus, in N, the price is taken fully, but for n-1, in the calculation we will take 80% of the price (for example:  10USD*80% or 8$) and so on. N-2, we will take 80% of80 %....

Which Moving Average to use?

EMA and WMA give more importance to recent prices. They are therefore more likely to give you the short term trend because they move quickly. But this means that they can give false signals to buy or sell. Its aim is to give the earliest possible time to enter a trade with quick signals they give.

The AMA’s main advantage is to eliminate the majority of false signals but on the other hand the short term trend appear you less quickly. However, the current trend will be clearly visible.

The more you choose a moving average calculated on a small number of periods, the more you'll get signals (and hence false signals) due to the fact that the moving average will stick to the price as shown in the chart below.

It is important to note that this is not the price that stick or follow the moving average but the reverse.

Therefore, it’s up to you to choose your best one..

How to interpret Moving Averages?

You doubt that if moving averages are bullish, we're in a bull market and whether they are bearish, we are in a bear market. We are in the presence of a trend.The market is in trend. The moving averages are used to take a position on the market because they deliver buy or sell signals in two forms:

- Depending on the price, the moving average is compared to the price.

Here is a chart illustrating the crossing of moving averages :

The chart below shows a phase of indecision. The breakout of the lower band of the range by moving average gives us the sell signal: 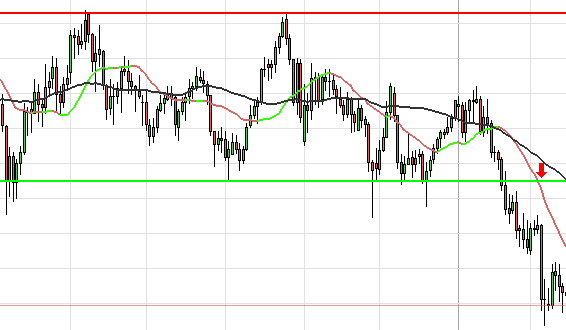