There are many angles from which we assess the charts of financial markets. For example we can describe the strength of a move by the relative candle sizes and shapes. We can assess the momentum using the RSI or stochastic. We can get information on the volatility from indicators such as the ATR or the Bollinger Band. The proximity to critical pivots is another important factor, as well as the relative wave length of the current swing compared to recent swings. The Elliott Wave Principles deals with the structure of the market.

Before learning any analysis approach, it is important to understand the basic “assumptions” and often times, we can find short-comings of our analysis by seeing these unfounded assumptions. However, the EW theory is not merely based on random assumptions. It is based on the Dow Theory so a little bit on Dow first: 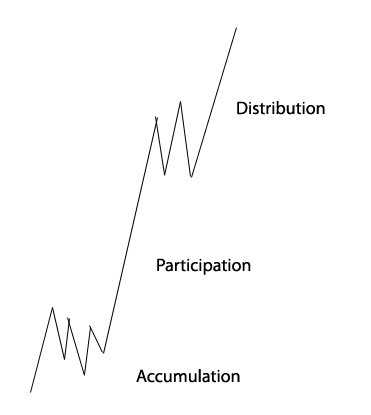 It was Charles H. Dow who founded the Wall Street Journal had some observations on market behavior. An editor of the newspaper from 1902-1929, William Peter Hamilton developed these tenets and published it in the Stock Market Barometer (1922). Then investment analyst Robert Rhea refined these observations in the Dow Theory (1932). Later Ralph Nelson Elliott read this, and was likely inspired to extend the investigation into market behavior and structure.

Here is how a tenet translates from Dow Theory to the EWP:

Phases of a trend

Dow described a major bullish phase as starting with accumulation, participation, then distribution, a 3-phase process.

EWP describes an impulse wave as a 5-wave rally, where accumulation= 1, then there is a correction, followed by participation, which is wave 3, then a wave 4 correction to be followed by that last distribution stage (wave 5).

Let’s take a look at some more of Mr. Elliott’s principles, which is published again in Frost and Precter’s Elliott Wave Principles (1978). This book has had many new editions by now, but remains the rudimentary source to learn about pure Elliott Wave Theory. 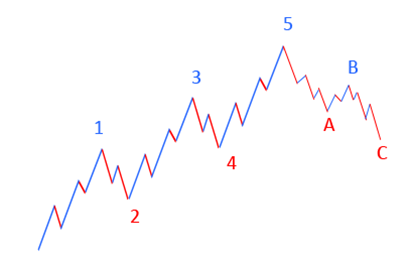 - Impulse (or Motive) wave is the direction of the primary trend.

- Correction is secondary and against the primary trend.

- The impulse wave has 5 waves while the corrective wave has 3.

- A completed wave cycle has an impulse wave and a completed corrective wave. Therefore a completed cycle should have a 5-3 structure as illustrated in the above image. 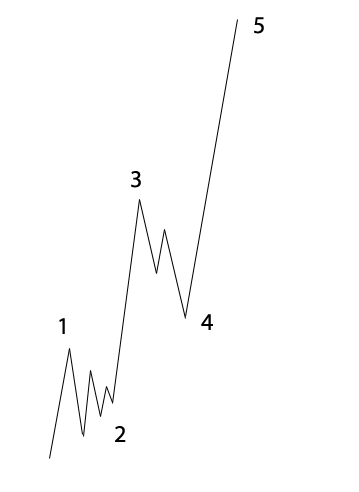 - End of wave VI cannot overlap the end of wave I.

- In an impulse wave, wave II, must not exceed the origin of wave I.

4. Guidelines – helps identify traditional EW structure but are not rules so they can be broken

- Wave I, III, and V could be relatively similar in length. We already know that the middle wave should not be the shortest.

- The corrective waves II, and IV should be different in structure (ie, zig zag vs. flat).

- Wave B, should not exceed wave V since wave V should capitulate a trend, giving way to a correction. (But these guidelines have exceptions as we will see.)

The image here illustrates the rules, but also shows that wave 3 does not always have to be the strongest. Knowing the variations are key in practical wave counting.

- A pure Elliottician, or Elliott Wave practitioner uses consistent labeling for the different degree in wave movements. The table below is taken from Frost and Prechter’s Elliott Wave Principle. Although this is a Elliott’s method of labeling, practitioners have used many variations of this convention. 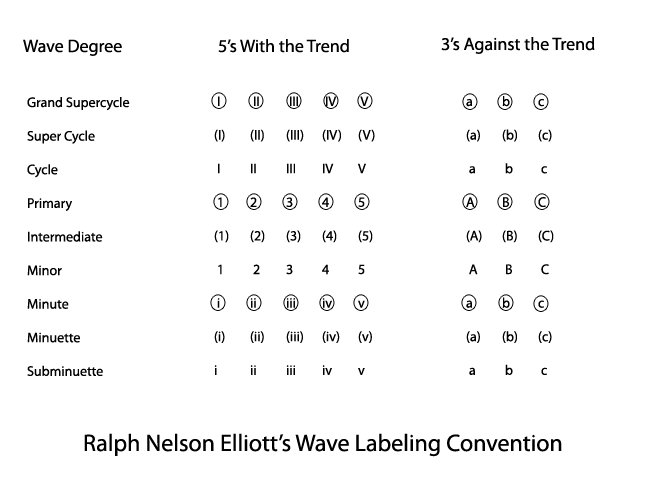 Don’t get too caught up in what label matches with scale of waves. What does it matter if the swings within a 1H chart is a minute or minuette.

It is more important we understand the relative scale of each move and label as such so we can visualize the fractal nature of wave structures. It should be noted that the table lists the labels in the same size font. In practice you should give higher degree moves larger fonts.