Resistance and support levels are essential for any trader as they establish the boundaries in which a currency pair will fluctuate and cause sudden price changes.

Briefly, a resistance level is a point above which a currency pair may struggle to rise unless there are strong bullish factors present. On the other hand, a support level acts as a barrier that hinders a pair's downward movement. Though a pair may break below a support level, the likelihood of the pair reversing to an upward trend is significant at this point.

Therefore, accurate identification of these levels is crucial in determining when to enter and exit trades for maximum profit. That is why it is essential to have a good understanding of how to properly identify resistance and support levels. We have compiled a list of the most effective methods for determining these levels.

The technique of identifying swing highs and lows is one of the simplest method. It doesn't require any additional tools or indicators, all the information you need is on the price chart. To find the resistance and support levels, you need to mark the recent highs and lows that are close to the current price.

Look for levels where the price has repeatedly bounced off and failed to break through. The more times the price has reversed at a level, the stronger that level is considered to be. Keep in mind that the levels identified may not be exact, as prices rarely stop at the exact same level, they may be a few pips above or below. To mark the level, you can draw a horizontal line.

As seen on the chart, the 1.15 level has proven to be a solid support for EUR/USD. The currency pair has bounced back from this level twice, specifically at the end of May and in the middle of June. 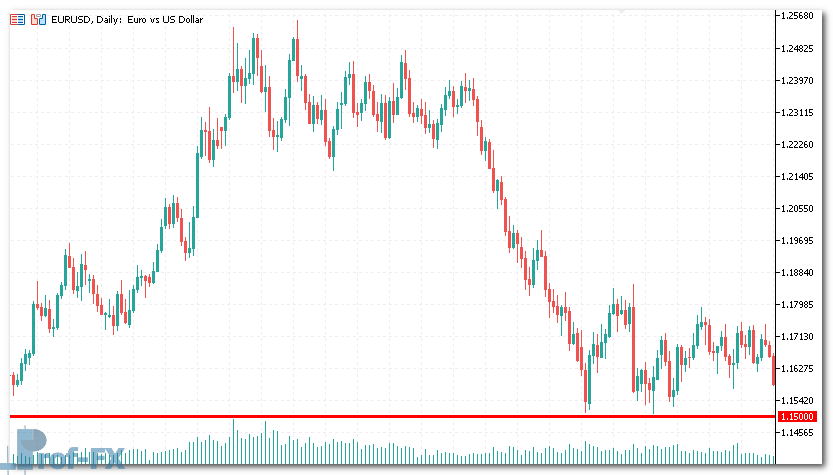 Psychological levels occur when the price of an asset ends with a certain number, such as 0 or 00. The more zeroes a level has, the more significant it is considered to be.

For example, 1.50 and 95.00. These levels are formed due to human behavior. For instance, when a person is asked about their prediction of future price of the GBP/USD pair, they are likely to give a broad range, such as 1.30-1.40, instead of a specific price, such as 1.3028-1.4123. As a result of this behavior, traders tend to place orders at "round" numbers, which leads to the pair trading within those numbers.

As shown on the chart, the US dollar index struggled to break above the $95 level for an extended period. Even when it managed to surpass that level, it couldn't maintain its position above it. 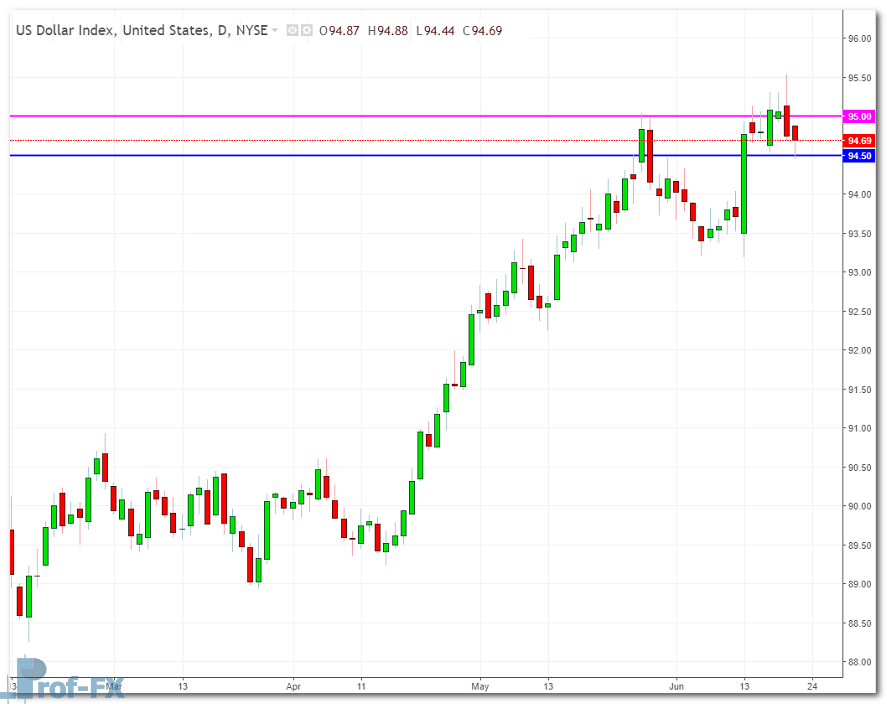 The most significant psychological level is the parity level (1.0000). In 2015-2017, traders were closely monitoring whether EUR/USD would reach parity or not. During that period, the decline of the euro halted at 1.0350.

It is important to always keep in mind that a trend can assist you in various trading scenarios. Identifying a trend is not complicated. By observing the chart, if the price has been moving consistently in the same direction for an extended period, it is considered a trend. Higher highs and higher lows indicate an uptrend, while lower highs and lower lows indicate a downtrend.

When searching for a trend, it's essential to remember that the line should not be flat and should connect a minimum of 2 points (either 2 highs or 2 lows). Additionally, the second point used to draw the trendline should be at least 20-30 candles away from the first one.

The more frequently the price reaches the trendline, the stronger the trend is considered to be.

On the chart of NZD/USD, an uptrend is visible. To identify the resistance level, you need to draw a trendline connecting each peak. Similarly, to find the support level, you can draw a line through the lows.

The same technique applies when identifying a downtrend. 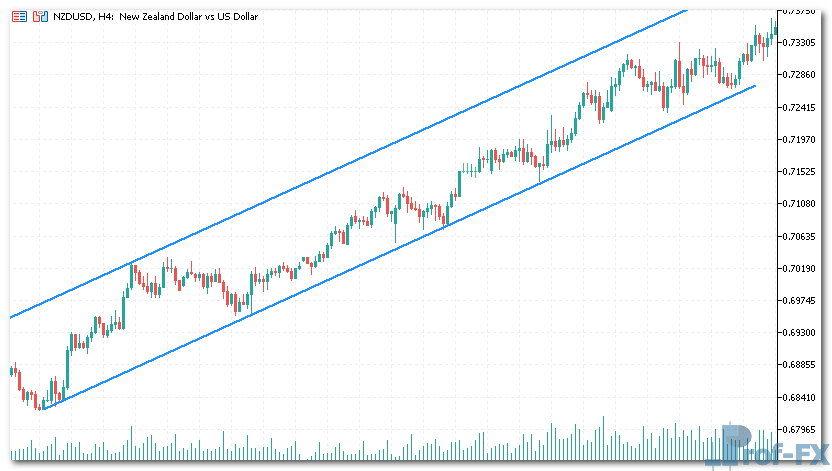 Resistance and support levels provide precise targets for an asset, depending on the timeframe selected. One advantage of using the pivot point indicator is that the levels are recalculated at the end of each period of the chosen timeframe.

Note: any timeframe can be selected, however, for a longer-term trading plan, it is recommended to use the weekly timeframe. This will provide weekly targets for the currency pair. 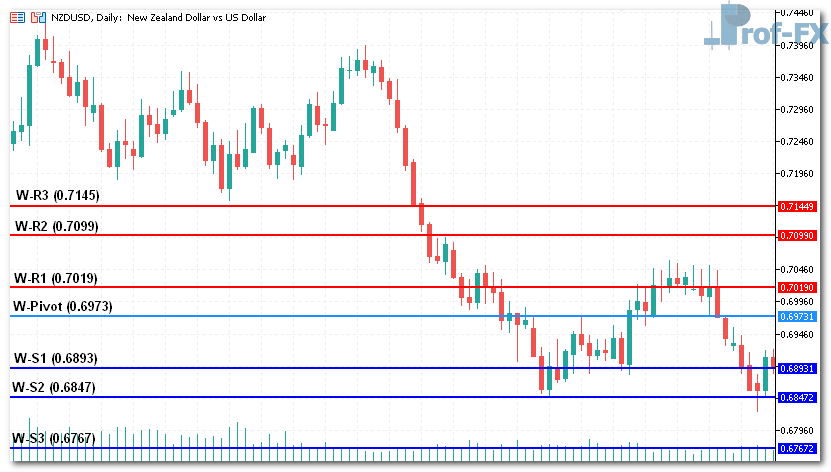 The Fibonacci tool is utilized to identify resistance and support levels or to estimate the potential range of a price movement. Its primary objective is to locate potential corrections against the primary trend. The crucial levels of Fibonacci retracements are 38.2%, 50%, and 61.8%, they are considered the strongest support or resistance depending on the direction of price movement.

Using the tool is straightforward. Draw a trendline connecting the high and the low points. If you want to learn more about how to implement the indicator, you can find more information here.

On the chart of EUR/USD, you can see that the pair bounced back from the 38.2 Fibonacci level and is heading towards the 50.0 level. 50.0 is likely to act as support for EUR/USD. 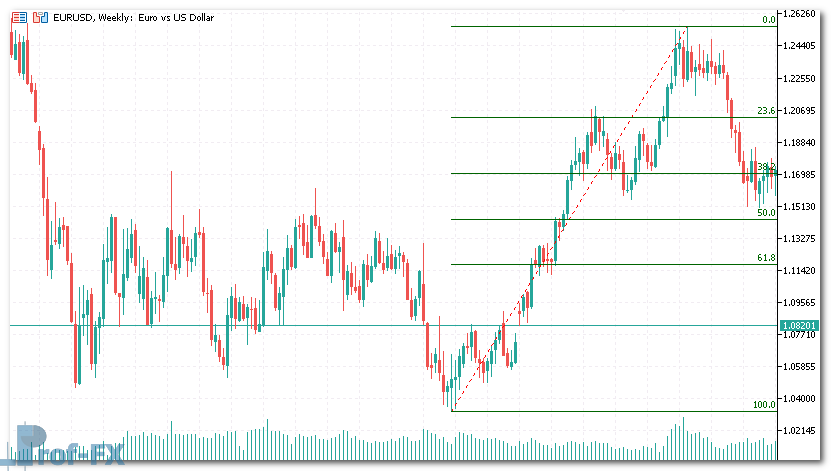 A helpful tip: it is not necessary to rely on just one of these techniques, you can combine them to achieve more precise targets.

In conclusion, it can be said that resistance and support levels are essential for successful trading. Using one technique or a combination of them can help to minimize risk and increase profits.