The movement of currencies is influenced by various factors: supply and demand, interest rates, economic growth and many others. Specifically, economic growth and exports is directly related to the domestic production of the country, it is natural that some currencies are closely linked to prices of raw materials. The currencies that have the closest correlation with the raw materials are the Australian Dollar (AUD), the Canadian Dollar (CAD) and New Zealand Dollar (NZD). Other currencies are correlated, such as the Swiss Franc or the Yen, but the correlation is lower.

There are many reasons behind the drop in oil prices, including a stronger dollar (since oil is priced in dollars) and an overall demand reduction. As a major oil exporter, Canada is severely affected by the decline in oil prices while Japan (general importer) benefits of that.

During the years 2006 to 2009 the correlation between the Canadian Dollar and the price of oil was about 80%. On a day this correlation may break but on the long term, their changes are correlated. Canada is the 7th largest oil producer in the world and will continue to grow in the list thanks to large reserves that have been discovered. These reserves have also been reported recently exploitable, which has attracted the attention of many importing countries such as China. In 2000, Canada has also surpassed Saudi Arabia and the United States as an oil producer. The oil reserves of Canada are the second largest after Saudi Arabia. Canada's proximity with the United States also plays an important role, the United States cannot meet all their needs with only their domestic production.

All these factors make Canada extremely sensitive to changes in oil prices. 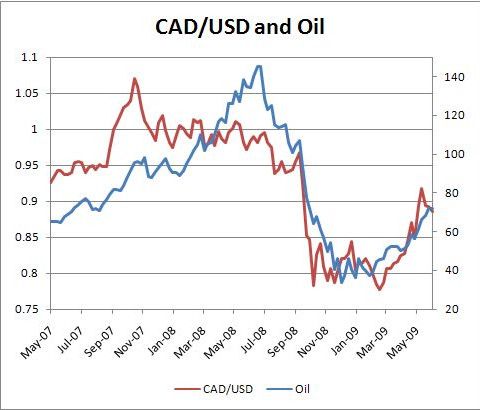 On the other hand, Japan's imports almost all the oil it consumes (compared to U.S. which imports about 50%). Before 2009, Japan was the 3rd largest oil importer behind the U.S. and China. Japan has a lack of natural resources and its important needs in oil make it very sensitive to changes in oil prices. Moreover, oil supplies to this country 49% of its energy needs and so when its price goes up, Japan's economy suffers. 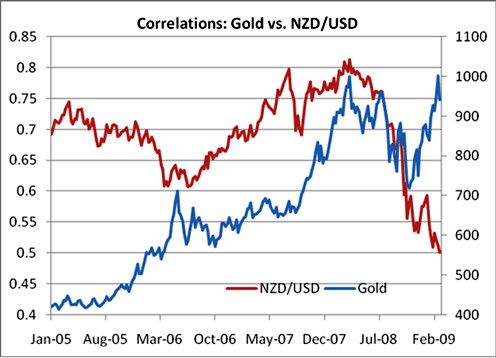 Everyone also knows that gold is priced in dollars and so when the dollar appreciates, the gold price goes down. We are in the case of a very strong negative correlation that shows perfectly the following graph representing the price of gold and the USD index. The USD index represents the evolution of the dollar against a basket of other currencies.

For commodities traders, have an eye on currency trading can be an alternative or supplement to the trading of commodities. Besides the correlations that may exist between different parities and commodities, traders can deal in foreign exchange, earning interest.

In fact, when you trade on the forex market, you are dealing with different countries and these countries have interest rates. For example, a trader who had bought the AUD / USD in March 2009 would have earned 3% more in interest if the interest rates in Australia remained at 3.25% and those of the United States has remained at 0.25% during the entire year.

When you buy a currency, you receive the interest rate. You should also know that these 3% have no leverage, so you can imagine the impact with the leverage available on the Forex. Of course, you must not forget that leverage can be very dangerous and can make you lose all your capital.

As you noted, it can be very interesting to trade on some currency parities that are correlated to gold rather than dealing in gold directly.

I advise you to be alert to changes in commodity prices but also to certain parities that are correlated with these commodities. Observe the time of impact of prices movements of commodities on the foreign exchange market. You will see that often these movements are overlayed and therefore offer good opportunities for profit.