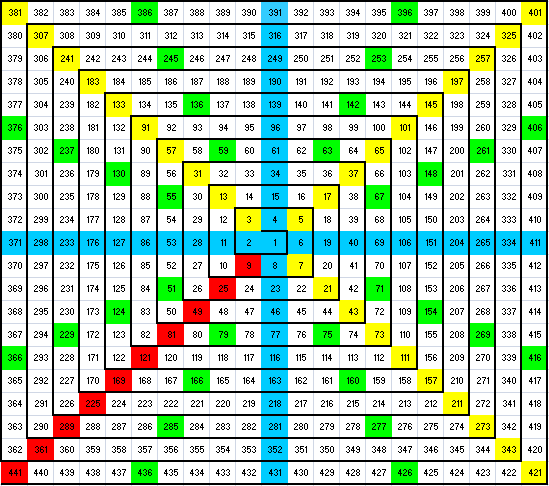 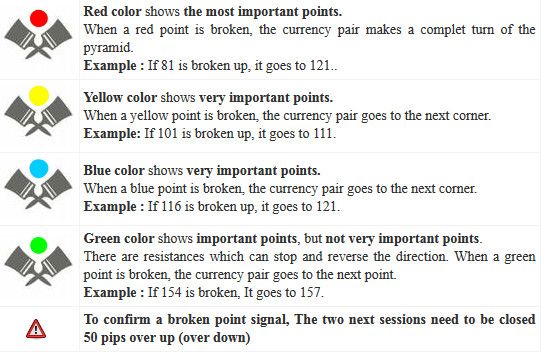 The gann’s pyramid is a basic of the trading, invented at the start of the last century. We could compare it to the Elliot waves or to the Fibonacci retracement (Gann also worked on others types of retracements). The Gann's pyramid doesn’t allow making day trading. It’s more a medium and long term analyzing tool. She allowed mostly seeing where the price is going, where it will face zone of resistances and supports.

You can find a test of the Gann's pyramid at the bottom of this page that shows that the pyramid is working!

To position your price in the pyramid, the principle is very simple : 1.50 correspond at 150. At the contrary, for parity quoted in hundreds, the price doesn’t change. (if a parity quote 98, we will place 98 on the pyramid) 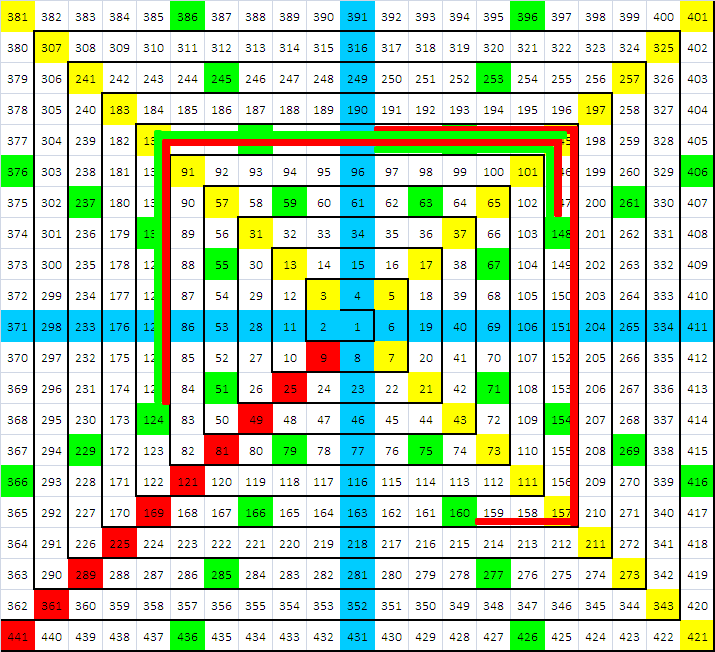 Take another historical daily chart and watch movements that have been done with the pyramid.

Original of the pyramid The Gann’s pyramid introduced above is very important. She gives vital information, some points are suggested. Indeed, the pyramid is mostly introduced with round numbers. That's why we had on our pyramid such levels as 108.5 or 113.5, to sum up, every green lines between 81 and 121 of the Gann's pyramid. The practice showed us that these points are sometimes key reversal trend points.

A journey is considered as validated if the closing price is above (or below) 50 pips of the line considered. To enter in position, two journeys must be validated. Some people will tell you that one day is enough. It’s your choice but note that the validation by 2 journeys allow to eliminate a high number of false signals. According to various comments that I could picked up, I advise you to adopt this last method.

Here now is how the pyramid is updated every evening: at the close of 11.00 pm, the close price of each parity is picked up. Then, we postpone this level in the pyramid of Gann on the corresponding parity. Take the example of EUR / USD which is between 139 and 142. If at the close of Monday, the price is higher than 142 (1.42), then we put an arrow up and an arrow down if the close is below 139 (1.39). Then, we choose the type of arrow and you just need to see the legend. A blue arrow means for example that the close was less than 50 pips and therefore the journey cannot be validated. Returning to our example of the EUR / USD, we assume now a close price at 1.4210. Then i put a blue arrow because between 142 and 142.10 there are only 10 pips. Thejourney is not validated. However, if the close is at 1.4260, I would put the white arrow with a 1 into it because we are in the case of a validated journey. To validate the 2nd day, it is also necessary that the close on Tuesday is + - 50 pips above 1.42. Once the two days validated, the gann’s pyramid indicates the next target of the parity. In our example this would be 1.45 because 1.45 is the upper limit between 142 and 145 in the pyramid.

Last important point: you updated each evening the Gann’s pyramid table, on which we indicate broken points, validated and others. This table is post on the Forum or in the section “technical analysis”.

The Gann’s pyramid must be used in a MT or LT timescale. Indeed, objectives are around several hundred of pips, it is therefore unusual that this one was reached during the day. Mostly, the trade is done in a week. Of course, there are no précised rules, movements of the market could be violent and your stop loss or your target reache rapidly. Three strategies are possible to trade with the Gann's pyramid. Obviously, each one can be modified according to your profile. Here are these methods:

- The first one consists to place a stop above or below the line that has just given the signal to buy or sell. The objective is the following line of the pyramid. This line is mostly at 250 or 300 pips, you can place your stop depending on the risk / return ratio (see money management). For example, if you impose you a ratio of 3 (risk 1 to win 3), your stop will be located approximately 250 / 3 = 83.3 pips below your entry point. The risk may be important (and controlled) but the expectation of profit is also big.

This method can be improved as follows: Your stop is placed not on the basis of a ratio, but according to a key level of support or resistance. So if a buy signal is given by the pyramid, you place your stop under the nearest major support. The objective is unchanged, that is to day the next line. However, although the lines of different colors can be viewed as goals, set your goal a few pips below (or above depending on the side) is appropriate.

The important thing is to be disciplined. We must stick to your objectives and not take fright at every market movement. There will be days the market will not stop going to the wrong side for you. It is perfectly normal because there are corrective movements constantly. The market never make a right line toward your goal. Like for the method of Dow, Gann's pyramid allows you to play the trend.

- The second method consists to trade Gann's pyramid by color. The operation is the same for each color. If a color is broken down or up, then the objective will be to the next line with the same color. Afterwards, according to each color, the goal will be more or less distant. Green are the most closed one and red the most distant. Thus, the objectives can be achieved only after many years or simply never be achieved. That is why we must work with moving stops. The position taken and the set up of the stop is done identically as the first method. However, once the next line is reached,we target the next line until you reach the line of the same color that is the goal. Thus, each new low and support that will form (in case you're bullish), the stop will be moved to reduce gradually the risk or to ensure your profits. After the stop can also be positioned below the last lowest, that 's up to you. Gann's pyramid then only give buy or sell signals , the objectives is almost never reached (because too far).

Study on the Gann's pyramid

To perform this study, we calculated the percentage of time that a high point or low point of the range was reached when a change of range occurred. Consider an example. The EUR / USD cross on the rise the level of 130. It is therefore in the range 130-133. 133 is its objective. If it is reached at more or less 10 pips, I count 1 in the table. If not, I put 0. The target can be reached at any time of the day. It may happen that there is only one day of validation and in this case I will put the sign "-" for the second day. The percentage represents the probability that the target is reached.

It is currently impossible to perform deep analysis given the limited data we have. The study began in early 2009 until Friday 27 March 2009. The best study would be to calculate the number of times that the line of the same color as the previous one has been reached when a buy or sell signal is given.

It is important to remember that the pyramid of Gann is not very suitable for day trading. Indeed, stop loss should be placed well below the range to avoid being stopped due to volatility in the day. However, it can be use with other indicators to determine stop loss much less distant. The super Trend for example, can be a useful tool to link with the pyramid Gann. Thus, the super trend determines your stop and the pyramid of Gann your objective.

In the medium and long term, the pyramid can be used with no other indicator by placing your stop well below the range. One hundred pips below seems appropriate. Concerning the objective, it’s up to you, but the importance of lines plays a big part. Going beyond a red line, for example, is an excellent point entry point, followed by yellow, the blue and green. The target can be for example set to the next line of the same color. Beautiful performances were achieved by using this method. These people will recognize and I’m greeting them

Here are the results of the study 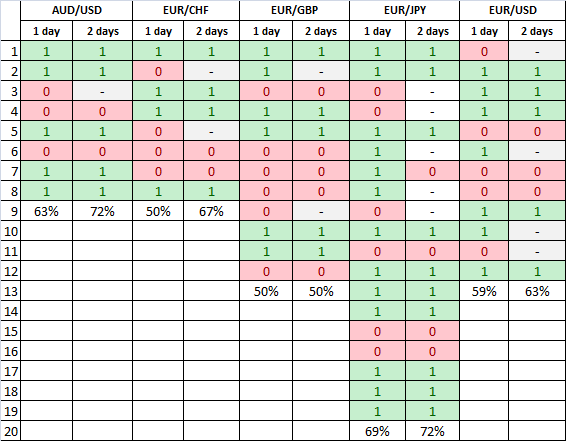 A summarization table of the performance:

As you can see, the Gann’s pyramid offer interesting results and is a very good indicator to enter or exit the market.

Study on the Gann's pyramid

One of our members (Huralp) is trading for more than four months with the Gann's pyramid. Here is his trading strategy: "I take two positions:

- A position with the next line as objective with a risk of 2% of my capital. No trailing stop used.

- A second position with the next same color line as objective with a risk of 1% + Trailing Stop corresponding to the difference between my opening price and my stop loss. 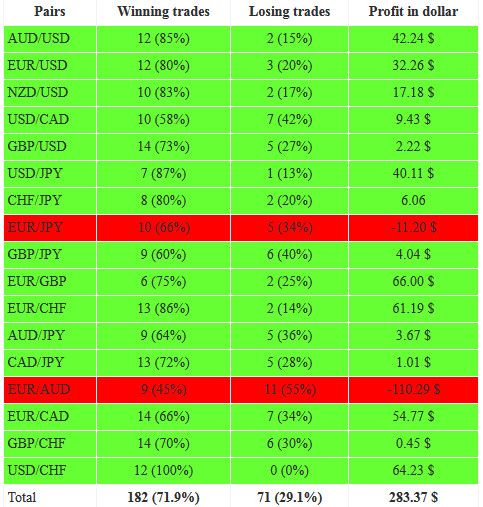