What Pivot Points are?

The pivot point is daily calculated. It identifies areas of resistances and supports. Although its calculation is mathematical, the pivot point also plays a very important psychological role for many traders who will buy or sell on these levels. Similarly as a resistance or a support, the pivot is a line, although it is better to talk about areas. But remain simple. This is the point at which a trend can change. If the pivot point is broken on the rise, it is a signal to buy. On the other hand, it can also be a signal to sell. It is important to note that the pivot point is mainly used in the short term to take advantage of small price changes.

As you can see, the pivot point is a psychological level. The price found support on the pivot of the day and immediately it has resulted a rebound of the pair. Thereafter, the trend has continued until r1 which acted as resistance but this level was broken and is now support.

How to calculate Pivot points ?

The pivot point is as I said a calculated point, as well as resistances and supports. Its calculation is performed every day at the end of the trading session to be used at the next session. It depends on 3 factors:

How to trade a pivot point?

Now consider the last case. You entered at the break of the pivot point. Assuming that theprice is now moving above the resistance R1. Instead of let your stop below the pivot point, you up your stop loss just below R1. So you can enjoy the uptrend movement while eliminating your risk. You are then sure to win because you earn at least the difference between the pivot and R1 (level of your stop loss). Your objective is now R2.

The pivot point appears to be a simple and effective trading strategy. But the reality is sometimes different. Indeed, the pivot is sometimes broken in one way or another then it’s broken in the other side without your first goal has been reached (S1 or R1). When the price is constantly moving around the pivot, it is preferable to not apply this method of trading. The pivot point is a method of trading, among others. If you have traded a little bit on the Forex or any other market, you have probably realized that there is no perfect method. All have advantages and disadvantages. It's up to you to choose which method you prefer.

The following study has been made by Forex-Tribe team. We have calculated the number of times where levels of resistances R1/R2 and support S1/S2 have been reached according to the open of the market at 23H CET with the pivot point. The daily study starts from 2008 to now and the weekly study from 2004 to nowadays..

Here are the results of the study : 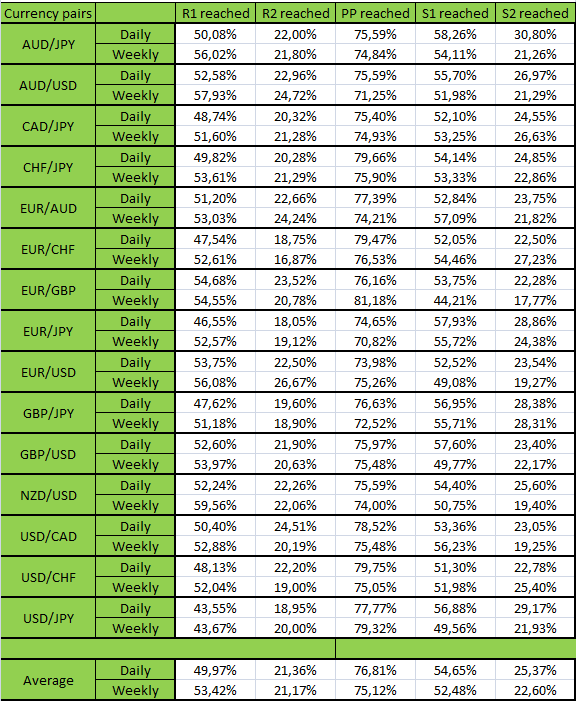 - Japanese candlesticks are becoming smaller and smaller at the approach of the pivot point. This marks a weakening of the movement (or at least a hesitation)

- Pivot points are like resistances and supports. More a pivot point will act as support or resistance during the day, more this level will be relevant and may lead to a reversal of the price. If the pivot point has been reached only once in the day or if he did not play the role of resistance or support at least once, it is more risky to trade the reversal.

There are plenty of technique to trade pivot points but here are 2 (the principle is simple, long above the pivot and short below):

- Taking a position based on the pivot point in the morning around 7-8h a.m or at 23 p.m in the evening when the new pivot point of the day is calculated. It is advisable to set the stop above a true last higher or lower that is seen, for example, on a 15 minutes timeframe if you trade daily pivot points. The advantage of setting your orders at night is that the market is less volatile and therefore it is less risky to see your stop reached. However, the target price (ie r1 or s1) will be harder to reach, indeed price fluctuations during the night are less important

I anticipate your question: what if the pivot is too far?

It is possible to set a ratio to trade with pivot points. If the price is over a third of the distance between the pivot point and s1 for example, so we do not take a strand. Example:
PP: 1.37 and s1: 1.3640. If the price is below 1.3680, then it is estimated that the risk is too bif=g and therefore you do not take position to target s1.

This technique is reliable but only with the pivot point. If a big movement occurred and s1 or r1 has been already reached, it is advisable to not take position. The order must be et only if the price is located near the pivot point.

- It is also possible to combine pivot points with technical analysis. I personally use this technique very often. I mark chart patterns (bullish channel, trend lines, double bottom or every chart patterns ...) and if one of the level of my chart pattern corresponds to a pivot point, it is considerably strengthen the support or resistance area. So, I can take position.

The calculation is the same except that the pivot is calculated by including the opening price of the day.

Pivot points are calculated from the previous day's prices

The calculation is the same. The pivot is conventionally calculated. Camarilla Pivot Points formulas  are as follows. Pivot points are calculated from the previous day's prices

Formulas are completely different and reflect the trend. Formulas for calculating Demark pivot points are as follows:

Fibonacci pivot points are key Fibonacci retracement (100%, 61.8% and 38.2%) applied to the price range covered during the last session. The price range is determined by the difference between the highest and lowest of the session.
These retracement levels are then added or subtracted from the pivot to obtain three levels of support and resistance. The pivot point is calculated like classic pivot point.