The G20 was created outside the G7 on September 25, 1999 in Washington, at a meeting of finance ministers of the group, after the succession of financial crises in the 1990s. The purpose of this new group is then to promote international financial stability and create opportunities for dialogue between the industrialized and emerging countries, such as meetings of finance ministers from the G8 do not allowed. It aims to promote international dialogue, incorporating the principle of a dialogue taking into account the broader economic weight taken by a growing number of countries. Besides acting to prevent global crises, the G20 is therefore also as a forum on the budget and monetary growth, trade and energy.

According to its creators, this group constitute "90% of global gross domestic product, 80% of international trade (including trade internal EU) and two-thirds of the world population, giving political weight and a significant legitimacy.

In 2009, there are 20 members of the G-20. These include the finance ministers and central bank governors of 19 countries: 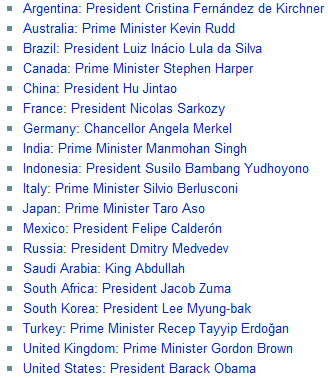 In G20, we find therefore G8 members and 11 countries of emerging economies. The European Union is represented by the Chairman of the council and the one of the European Central Bank, which explains the name of G20. The International Monetary Fund (IMF) and World Bank (WB) are also present.

G20 - A growing role with the crisis

Initially, only a meeting of finance ministers and central bankers held annually. The role of the G20 was strengthened last year with the financial crisis, when its first summit of Heads of States held November 15 in Washington, at the invitation of former U.S. President George W. Bush.
On November 15, 2008, for the first time in its history, these are the Heads of State or Government who met and not only finance ministers.

The G20 summit condemned the temptation of protectionism and recommends in its final communiqué of fiscal measures to stimulate domestic demand with quick results, he also stresses the importance of support that monetary policy can make in conditions appropriate to each country.

A new summit has followed a few months after, April 2, 2009. This shows the importance of the Group of 20 during the crisis. The G20 looks for ways to share and introduce new rules for on the one hand, the world can overcome this crisis and secondly that this crisis will never happens again. Very concrete actions have been taken after the summit.

Here are the main measures that were adopted following the summit:

1 - 1,000 billion dollars more for the IMF and World Bank
The G20 pledged to raise 1,000 billion resources of the International Monetary Fund (IMF) and World Bank. According to the final communique, the leaders of both institutions will now be appointed on merit.

In practice, the IMF will see its funds tripling in capacity, with 500 billion dollars, said Gordon Brown during a press conference. These funds will consist of "new money" and by special drawing rights (SDRs) of IMF.

The Fund will also be able to sell gold to finance assistance to the poorest countries. And 250 billion dollars earmarked to help finance trade to revive world trade.

All this will therefore strengthen the power of the IMF, which is however, often criticized by specialist. It is often said that the IMF is 'overdue' and sees crises happen after everybody. This is partly due to its political importance. The IMF is often very optimistic to not panic financial markets.

2 - A blacklist of tax havens
A list of tax havens was published by the OECD to discourage tax evasion. The OECD has published two lists of tax havens. A blacklist with the Costa Rica, Malaysia, Philippines and Uruguay. This list includes countries that have never committed to international standards. A second list, including 38 countries including Monaco, Liechtenstein, Switzerland, Luxembourg and Belgium, identifies states that have pledged to abide OECD rules but did not "substantially" applied. The OECD has also published a list of countries with "substantial" international rules, including France, Russia, the United States and China.

"Time banking secrecy is over", has congratulated Nicolas Sarkozy during his press conference after the summit. The principle of a blacklist of countries tax non-cooperative effect has been endorsed by the G20. The OECD should publish in the coming hours the list of states that do not comply with global rules for the exchange of tax information.

A list of sanction is also provided for these spaces non-cooperative "in the declaration, they range from the increased of administrative burden to the prohibition of international organizations in placing funds in those states. And a range of penalties must be defined by Ministers of Finance although a number are provided in the statement, "said Nicolas Sarkozy.

3 - "new rules" of governance of financial markets
Furthermore, the G20 countries have agreed to implement "new rules" on wages and bonuses in the world, has announced the British Prime Minister after the summit.

The leaders have adopted principles and penalties that are already planned to enforce "those who have risky policies bear the cost in terms of capital requirements. To be clear, supervisors may require banks that don’t have reasonable policy to pay traders, obligations in terms of increasing their capital. The too is unheard of, "said Nicolas Sarkozy.

Hedge funds and funds will also be mentored by supervisors. The activity of banks also will be monitored, including any regard to securitization activities and off-balance sheet should be more transparent. A new organization of global finance should also be created to prevent crises.