What is a Gap?

Gaps are due to a big number of transaction or orders in the same side between the close of a candlestick and the opening of a new one. There are two types of Gap :

- An bullish gap appears when the opening price of a candlestick is higher than the close of the previous candlestick. For example, here are two bullish gaps on the graphic below : 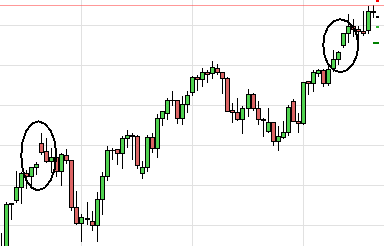 - A bearish gap appears when the opening price of a candlestick is lower than the close of the previous candlestick. For example, here are two bearsih gaps on the graphic below : 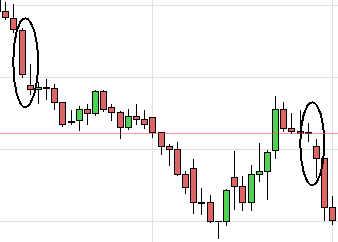 On the Forex, it is very often that a gap appears at the opening on a sunday evening, but the reasons for the gap are unique to Forex. Why more specifically at the opening of the market? Because the market is still open on weekends. Only brokers(or Market Makers) stop to price on Friday night but banks can continue to buy or sell currencies during all the weekend. That's why gaps are appearing.

Gaps are therefore predictable on Forex. Only those who kept their position during the weekend will benefit (if the gap is in the right side) of the movement caused by the gap.

In stocks markets, things are slightly different. Indeed, markets are closing every night at 17h30 (for the CAC40),so you can see overnight gaps. Gaps are due to orders made during the fixing.

We can therefore say that the majority of gaps are opening gaps on the Forex, although it is possible to see them during the day (most of the time for the announcement of a significant economic news). Indeed, only major economic announcements could cause such gaps in quotes. The rest of the time, the opening price of the candlestick will be almost the same as the closing price of the previous one.

There are several ways to trade after a Gap. You can handle the corrective movement. Indeed, most of the time, gaps are filled, that is to say after the gap, the price gets back on the closing price of the candlestick which is before the gap. The gap can be filled in the candlestick on which occured the gap but also on the following candlesticks. Remember that the majority of gaps are filled. The difficulty is how to set your stop loss. Two scenarios can occur if the gap is filled: 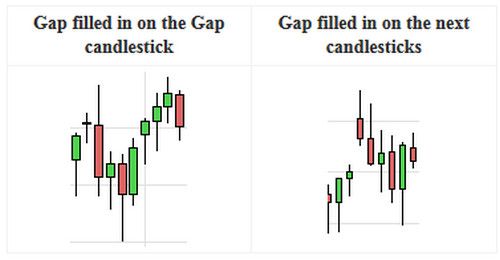 Although gaps are mostly filled, it is difficult to trade the filling of a gap. Indeed, it may be filled after one or a lot of candlesticks or simply never be filled. We therefore recommend not to trade on the opposite side of the gap.

Another technique is to wait the end of the corrective movement (gap filled), then enter the market on the side of the Gap. The higher the gap, the greater the likelihood that the movement will continue on the side of the gap after the gap has been filled. The problem is still to set your stop loss and that could be tricky. Stop loss have then to be set far from the price. However, the closing price preceding the gap is often a good support in case of a correction, but in the opposite case, it is a big resistance if a rebound occur.

Here is a study on Forex gaps realized between 2000 and 2010 on daily charts. This study makes appear the bullish and bearish gap filled on the period. The study was conducted on gaps of more than 20 pips for more relevance. The results are as follows: 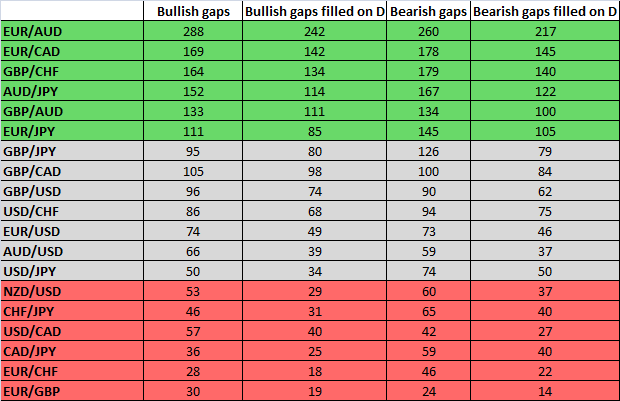 Here now is the the percentage of gaps filled in D (the day on which the gap occured) for each parity, and as well for D+1 and D+2. 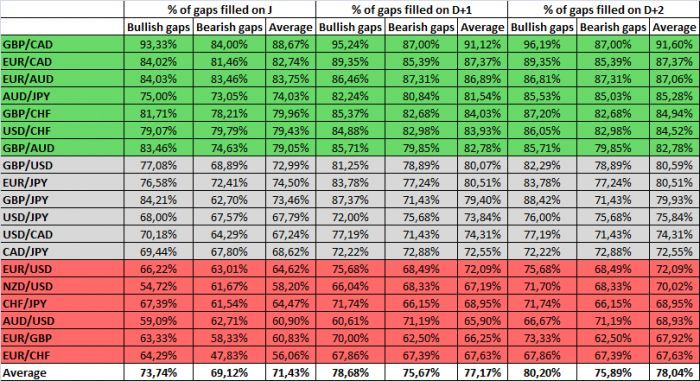 The results are impressive. About 80% of gaps are filled on Forex on D +2. These are obviously the most volatile parities that have the highest percentage of filling. This statistic reflects the importance for a gap to be filled in before continuing its movement. The moment the gap is filled is also a good opportunity to enter into the side of the gap (for those who want to trade gaps). We can also note that the difference between D +1 and D +2 is minimal. It is not interesting to trade gaps on D +2.

We can also notice that the bullish gaps are filled more often than bearish gaps. This is probably due to the human psychology. As on stock markets, investors always say that a downward movement will be faster than an upward movement. So when a bearish gap occurs, investors believe more in the continuation of the movement than the filling the gap on the next days.