Economic cycles are periods that follow one another during which economic activity is more or less good. It is the evolution of economic activity that we called market situtations. Indeed, economic growth is not continuous. There are 4 phases in a cycle:

- Recovery: This is a turning point between recession and growth stages. It seeks by all means to get out of the crisis and we are seeing a lot of restructuring. The state then tries to give a growth relay by investing heavily to meet growth and restore confidence. This stage is also a technological innovation period that can help overcome the crisis. Gradually returns and growth get back and a virtuous circle is set up.

- Expansion: This is the stage of prosperity. All indicators are green and we are witnessing a rise in production, wages, profits and consumption. Private investment is then very strong, market actors wanting to increase their production capacity to meet growing demand.

- Overheating: This is a turning point between the phase of growth and recession. Indeed, during the expansion time, inflation appears because there are more and more money in circulation (rising wages, interest rates still low in the early stages of expansion. So we will assist to a general rise in prices which will lead to a decline in consumption and thus investment. Manufacturers who have more important inventories to sell, they will gradually seek to reduce their production and reduce prices to sell their stocks. The beginning of the crisis is then close

- Recession: The overheating stage has lead to massive layouts and that have a significant impact on consumption. Their salaries are frozen and the discontent of households is growing, so. A crisis of confidence is then settled at all levels. Indeed some actors (the weaker) disappear and a certain distrust is present between all actors. On the interbank market, this is translates into a drying out. Banks do not dare to lend to each other and households consumes less and less, scare by the crisis. Consumption become lower and lower, companies continue to adjust their level of production to this consumption and then a vicious circle begins.

The graph below illustrates the different stages crossed by our economies and made appear sectors where you will invest according to markets situations: 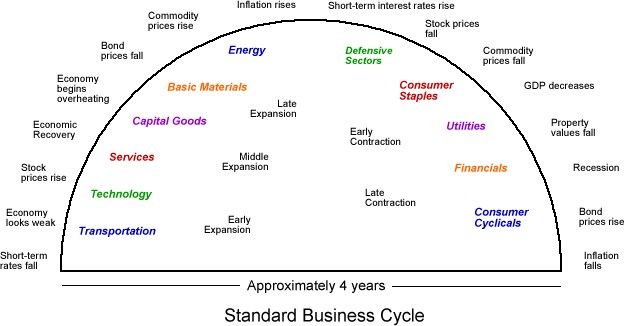 This is called sector rotation. For example, when we enter on the recovery stage, it is better to invest in the transport sector, automotive sector to get a maximum profit from the market situations.

The link between economic cycle and interest rates

Economic cycles are a series of cyclical stages and each is normally associated with a very specific configuration of interest rates. (Levels and structures).

Thus, we see that the recovery in economic activity generally occurs in a context of low interest rates and a rising yield curve. The low interest rates are essential to the recovery, they help to boost investment (because of the low cost of credit) by injecting massive liquidity into the financial system. The yield curve should be upward reflecting a renewed confidence in the future.

In the expansion stage, interest rates rise in part to limit inflation driven by growth. In parallel, the yield curve will flatten out (reduce the spread between short and long rates) reflecting a distrust in the continuity of growth.

The overheating stage, there is an inversion of the yield curve which is now downward. Short rates will remain high but this is the fall of long rates that will reverse the shape of the yield curve. This means that economic actors have no confidence in the future. Then little by little, short rates will follow the fall in long rates in an attempt to regain the growth of the previous stage.

Finally, the recession comes and the rates are at their lowest in order to revive economic activity. Low short rates reflect a near-zero trust between economic actors. Short rates will continue to go down to form a flat yield curve. The crisis of trust is very important. Indeed,  actors estimate that to lend money on the short-term has a risk level equivalent to lend money on the long term. Then, gradually, the yield curve will rise and will become ascending again. This is the beginning of the recovery stage.

- KITCHIN cycles: He is an economist who believes that American business cycle lasts about 40 months. This is the variations of inventories that explains the transition from growth to recession. Indeed, in an expansion stage, inventories rise dramatically, companies wishing to meet a demand in growth. This increase in inventories is due to an increase in production capacity that will gradually become higher than the demand and thus led to the creation of large inventories. Then, gradually, firms will anticipate or experience a slowdown in economic activity and the destocking stage will begin. We are then entering the recession stage.

- Juglar cycles: This is a French economist who believes that the economic cycle lasts between 6 and 11 years. For him, changing economic situations is due to changes in investment. In expansion stage, investments are strong because interest rates are still low. The period of overheating is a period of overinvestment. Then, gradually, with rising interest rates (to curb inflation), loan demand will gradually decline and investment will be less important. The recession stage begins.

- Kondratieff cycles: He is an economist who believes that an economic cycle lasts between 30 and 50. For him, the boom can arise as a major innovation that will revolutionize our civilization and will result secondary innovations. He speaks of clusters of innovations that will generate growth and by the creation of new markets and a massive investment requirement. Then, gradually, the market will reach a saturation stage and it we will gradually enter into recession. Here's to him the major innovations that have occurred: