Introduction: it was during the thirties that Ralph Nelson Elliott shows that markets have cycles and that these cycles are rules by waves of Fibonacci numbers. Elliott's theory is a very exciting one because it includes all movements on all timing. According to this theory, the evolution of markets is through a series of waves, and that, whatever the scale of observation of this market (from minutes to long term).

Basic principle of the theory :

- The markets have cycles and evolve in waves.
- Each wave can be decompose into sub waves of a lower timing.
- A complete cycle consists of a wave of momentum and a wave of correction: the wave of momentum is divided into five sub waves, the wave correction in three waves.
- Cycles ST, MT and LT are muddled continuously, thus a cycle never act independently, but is directly influenced by his senior cycle. (See Figure 2: decomposition of a MT cycle) 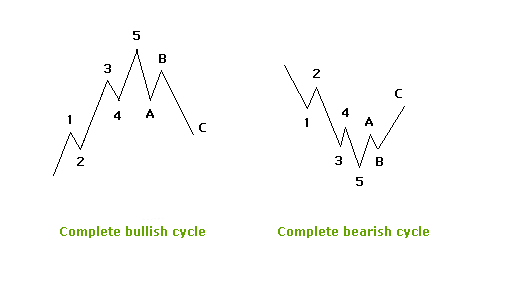 The corrective waves are waves 2, 4, B and are out of the trend. 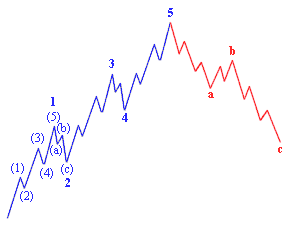 Decomposition of a medium term cycle

(The wave 1 of the MT cycle is divided into 5 waves of the ST cycle.)

- Wave 1: The waves 1 are difficult to recognize because they can be interpreted as simple corrections part of the previous market. They are usually very short and fast. Often we can only subdivide the wave 1 in three waves, not 5. This wave is the wave of "shrewd" according to the Dow’s theory which considered that they had access to information before others. We can also say that this is the wave of contrarians who buy when the market goes down and sell when it rises.

- Wave 2: It usually corrects the first wave significantly and often made us thinking that the previous movement is not yet completed (end of wave C). Waves 2, which totally correct wave 1 are not unusual: this is a double bottom patterns if it is a bullish movement or a double top in a bearish movement.

- Wave 3: This is the wave of "followers". It is the main wave of the movement. A basic rule to remember about this type of wave is that it is never the shortest one among waves of momentum that are 1, 3 and 5. These waves generally have extensions and come along by high volumes.

- Wave 4: This wave is less violent than the wave 2. It consolidates the market. According to the principle of alternation (see below), this wave is often complex: structure in several waves and often in a triangle. A rule to remember: a wave 4 does not break the level reached by the end of wave 1.

- Wave 5: This is the wave of small shareholders. She is generally weak but normally long. This is the last stage of a movement: the end of the euphoria for bullish movements and of desperation for bearish movements. At the end of wave 5, there is a decline in volumes and sometimes a wave 5 which does not exceed the top or bottom (according to a bullish or bearish market) of wave 3.

- Wave-A: They are sometimes considered as technical corrections and not the beginning of the end of the movement.

- Wave B: They sometimes reach the top (for a bullish movement) of the wave 5 to form a double-top.

- Wave C: They just close the sequence of eight waves of Elliott’s theory. These are very closed to waves 3 in magnitude. Their similarities also lead to frequent confusion: are we truly in a bear market or in a simple correction stage?

Elliott Waves Theory is not a tool to take a decision. You should not base your entry decisions or exit one on the waves of Elliott or the Fibonacci numbers. This theory is neither more than a help to identify the market trend.