Forex is the foreign exchange market. Various currencies are traded between each others on a parity form. Before understanding the functioning of this market, it is therefore advisable to indroduce each currency.

At first, here is a table showing the evolution of most traded currencies on the Forex as a percentage of total transaction volume (3981 billion in 2010):

The euro is the single currency of countries which are member of the European Union and have adopted the euro, so it represents  322 million of inhabitants.

The euro was used first on January 1st 2002 in 11 countries: Austria, Belgium, Finland, France, Ireland, Italy, Luxembourg, Netherlands, and Portugal. However, since 1999 the euro is traded on financial markets.

Then, little by little new countries joined the euro area which now has 16 members as shown in the map below: 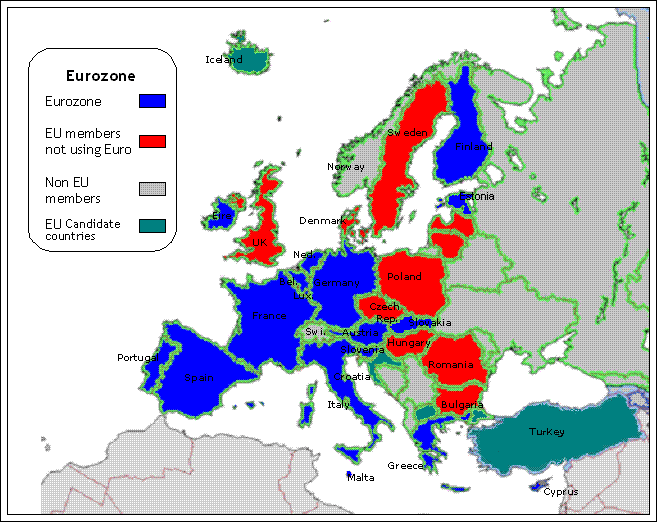 Some countries like England or Denmark have chosen to not enter into the euro zone but for most, this is because he does not satisfy the criteria to include this area. The criteria are:

- A public deficit below 3%
- A public debt not exceeding 60% of GDP
- Low inflation
- An independant central bank
- A national currency stable for at least two years.

As you can see, some of these criteria are not respected by some countries already members of the eurozone, due to the crisis. However, the schedule is the following for the integration of new countries: In 2010 Lithuania, Bulgaria, Estonia and Latvia, the Czech Republic in 2012 and in 2013 Hungary and Romania

The dollar is the currency of the United States and those overseas territories since May 2, 1792. This represents approximately 310 million of inhabitants.

The U.S. dollar is considered as a safe currency. In times of crisis, investors buy massive amounts of dollars, the U.S. being the first world economic power. Moreover, the currency has previously shown repeatedly its strength. The dollar has indeed gone through several crises.

For all these reasons, the dollar has gained the trust of investors and is now the reserve currency most used in the world.

The British Pound is the currency of Great Britain and Northern Irlande. Although both countries are part of the European Union, they both refused to incorporate the Euro area and have therefore retained their currency.

The British Pound notoriety derives in part from the fact that London is the most active financial trading place on the foreign exchange market. Indeed, 41% of the total transaction is made on this financial center.

Moreover, the Pound is a historical currency like the dollar. The Pound has been for a long time one of the strongest currencies with a highest at 2.10 on the GBP / USD in late 2007.

Today, the British Pound currency is playing an important role on the foreign exchange market:
- The pound is present in 15% of transactions making it the fourth most traded currency
- London is the first financial center on Forex
- The pound is a recognized currency in international trade

The Yen is the national currency of Japan. It was created in 1870.

For many years, before the subprime crisis, the currency was subject to massive carry trade operations. Indeed, investors took advantage of the differential interest rate between the yen and other currencies. Thus, the yen has depreciated considerably which allowed Japan economy based mainly on exports, to know good days.

Today, the yen play an important role on the foreign exchange market:
- The Yen is present in 16.5% of transactions making it the third most traded currency
- The USD / JPY is the second most traded parity with 13% of transactions
- The yen is a currency recognized in international trade